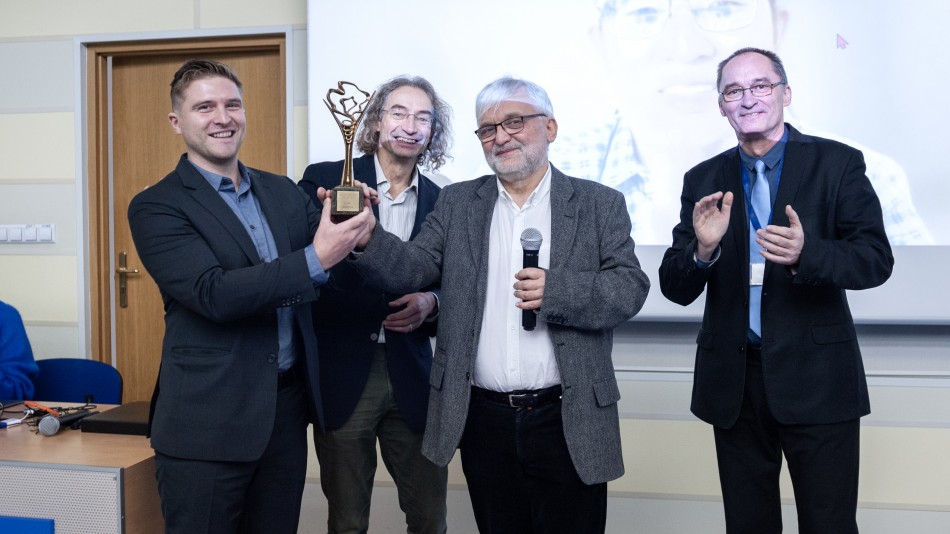 Today is a big day for science. Young minds were awarded in the contest like no other. The scientists, visionaries, and dreamers, not hesitating to ask "What if?" achieved the prizes in the Dream Chemistry Award competition in Warsaw, Poland.

This award is not about scientific achievements but about vision. This unique international contest promotes young researchers who want to step forward with innovative dreams. The Dream Chemistry Award was established in 2013 by Robert Hołyst from the Institute of Physical Chemistry of the Polish Academy of Sciences (ICF), Warsaw, Poland. Since 2017 the contest has been co-organized with the Institute of Organic Chemistry and Biochemistry of the Czech Academy of Sciences (IOCB Prague), Prague, Czech Republic.

The winner of the 2022 contest is Carl K. Brozek from the University of Oregon, dreaming about capturing energy with controllable chaos. As the laureate, he received a statuette and a financial reward of 10,000 EUR. The Scientific Committee also awarded the TOP 5 Prize to Ahmed Badran (Scripps Research), Claudia Contini (Imperial College London), Liang Feng (Northwestern University), and Ghislaine Vantomme (Eindhoven University of Technology).

The jury searched for a scientist who could dream big, envision a brighter future, and would not be afraid to step into the unknown and dream. This contest is for researchers with unique perspectives seen only by them and who envision novel ways to make their dreams come true. Ultimately, imagination and the daringness to dream about bold new ideas could change our world.

The winner dreamer of the contest in 2022, Carl Brozek, proposed the innovative idea of taking a closer look at the wasted energy lost daily. In his concept, controlling the entropy of molecules will provide a new tool for capturing waste energy released in the environment.

"The dream that I presented was my dream for a very long time in my scientific work. I'll now have the confidence to know that this dream isn't just fantasy and it'll inspire not only me but my students too. Participation in this contest and getting the award tremendously helped me practice and improve my own science communication skills. Challenging young scientists to focus on science communication is a huge and unique benefit of this science festival." – Carl remarks

His story begins with water molecules dancing around, constantly finding new configurations as they absorb heat. The higher the temperature, the more configurations they rapidly adopt. More configurations increase the entropy; that is the point, and the same is true for all chemical reactions. In reactions where electrons move between molecules — called redox reactions —  the temperature increases the redox entropy. His dream is to capture this change in entropy with a particular class of molecules and materials. People have known that temperature gradients can create an electrical voltage for centuries. This phenomenon is called the Seebeck effect. However, this effect has never been significant enough to tackle one of society's major challenges: how to convert so-called "low-grade waste heat"— the typical energy of a warm bedroom. He wants to radically rethink a technology called thermocells, where redox reactions feeling a temperature gradient can cause current to flow and provide electrical work. However, thermocells are only in their infancy. They cannot provide enough current or a large enough voltage with real-world low-grade waste heat. Here comes Carl's dream: by designing materials we can control even to the molecular level, we can change their redox entropies to be far larger than has ever been achieved. By doing so, enormous redox entropies will give rise to voltages hundreds or even thousands of times greater than currently possible with a typical thermocell. In his dream, capturing energy from entropy could have a revolutionary impact on today's world, from the energy sector to the life sciences. This controlled chaos would save a tremendous amount of energy.

The link to the interview with the Winner – Carl K. Brozek, is here: https://youtu.be/FrfBDNconEc

Institute of Physical Chemistry of the Polish Academy of Sciences