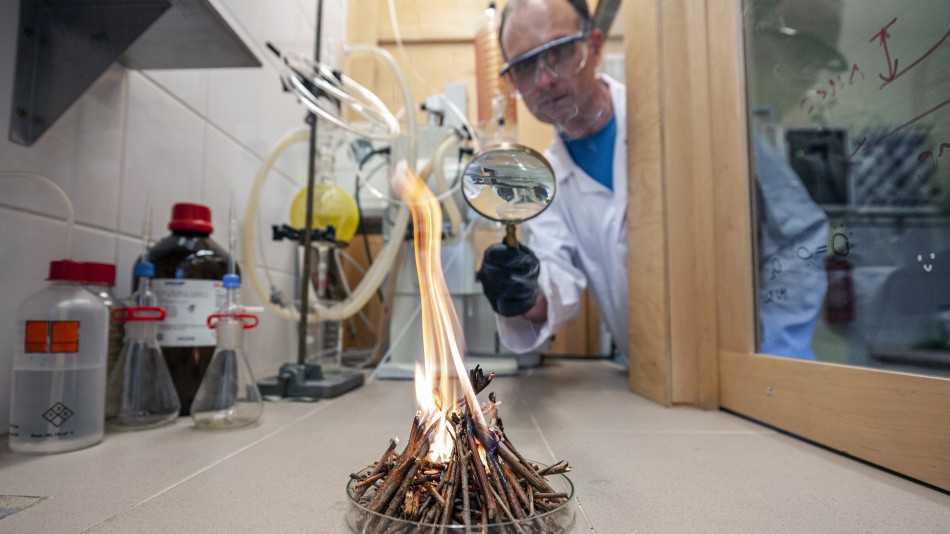 The atmosphere that surrounds us is much more complex than we think. Among the well-known nitrogen, oxygen, and traces of other gases, it also contains far more harmful compounds than we can even imagine. Where do they come from? Indeed, their presence is caused by anthropogenic activities. However, their formation processes are complicated and depend on many parameters. Recently, researchers from the Institute of the Physical Chemistry, Polish Academy of Sciences, led by prof. Rafał Szmigielski, under collaboration with researchers from the Environmental Protection Agency in the U.S., unraveled the origins of nitrophenols – a cancerogenic compounds – in the air that we breathe in. So far, let’s look closer at why we should avoid barbeque.

All we need is air. Actually, we also need water and food to survive; however, the air a key player. As books say – it contains nitrogen, oxygen, carbon dioxide, and traces of some other gases. In fact, due to human activity, and industrialization, we observe tremendous growth in air pollution. So far, the PM10 and PM2.5 particles that are well known as the main reasons for the smog are not the sole components of the air pollution. All activities engaging the fossil-derived materials to be used and burning the biomass sooner or later cause the air contamination. How does it work? Let’s start from the beginning.

We all use cars, buses, or airplanes to cross long distances. Therefore, we generate large amounts of air pollution. Despite the opinions of the vehicles’ producers, fossil-derived fuel-based engines do not produce only CO2 and H2O while operating. As long as the engine is used, not-fully burned compounds quickly get to the atmosphere and pollute it. Another reason for the pollution is tanking of cars with gasoline. Even one spit of fuel quickly evaporates, delivering to the atmosphere the volatile organic compounds that can quickly settle on the dust and spread through the long distances. Another factor is the burning of biomass. Once we burn wood or coal or make barbeque, we produce smoke. The smoke can be easily recognized, and here, if we would produce only CO2 and H2O while burning biomass, the smoke would not be greyish. So far, we produce large amounts of dust and organic compounds that spread with the wind. That is not the end of the story. Making a barbeque also delivers many harmful organic compounds into the air, and as an effect, many chemicals are sooner or later around us. As an effect, the air is full of nitric oxides, commonly known as NOx. Here is the point, what happens then with all these chemicals in the atmosphere?

Recently, researchers from the Institute of the Physical Chemistry, Polish Academy of Sciences, led by prof. Rafał Szmigielski, under collaboration with researchers from Environmental Protection Agency in the U.S, unraveled the origins of the cancerogenic compounds – nitrophenols – in the atmosphere, bringing together all the factors mentioned above in their studies. Scientists performed several studies on the aerosol particles enriched with the biomass burning-derived compounds and then spread them into a highly sophisticated laboratory chamber to mimic the atmospheric conditions. At first, the chamber was filled with air gases. Then, step by step, researchers have added to the chamber inorganic seeds and organic precursors, i.e., aromatic hydrocarbons, after illuminating them with the solar-imitating radiation. Of course, they also filled the chamber with the humidity present in the air coming from the evaporation of aquatic reservoirs and nitrogen oxides being products of the anthropogenic activity.

Sadly, the results they presented were not optimistic for our health. They found out that the “soup” of the compounds and particles they had placed in the chamber spontaneously started to undergo chemical reactions under the solar radiation, leading to the transformation of the nitric oxides into the nitrophenols commonly known as harmful chemicals leading to severe health problems.

As long as these reactions occur in the laboratory chamber, we are far from the problem. Unfortunately, nitric oxides are present in the atmosphere, and their amount increases with human activity. Barbeques, car tanking, wood burning in the chimney, or grass burning in the field, all these and other activities increase the presence of the nitric oxides and dust in the atmosphere, that under the solar light transform into the cancerogenic nitrophenols. Such a group of compounds contains a few types of these nitrophenols, while all of them, 2-nitrophenol, 3-nitrophenol, and 4-nitrophenol, are hazardous.

Prof. Szmigielski remarks “This study showed for the first time the effect of three pure nitrophenols and their mixture on human lung cells to provide basic understanding of the NP influence on cell elements and processes. We identified NPs in ambient PM2.5 and secondary organic aerosol (SOA) particles generated from the photooxidation of monocyclic aromatic hydrocarbons specialized smog chamber.”.

Besides the laboratory chamber analyzes, researchers also performed in vitro tests checking how particular nitrophenols and their mixture work on the human epithelial cells and the lung cancer cells. Since the results on the healthy epithelial cells confirmed the high toxicity of the nitrophenols, especially 2-nitrophenol and 4-nitrophenol, they also revealed how does it happen that nitrophenols so effectively damage healthy cells. They found that these organic compounds lead to the local rearrangements of the double fatty acid layer coating the cell, acting as the natural firewall protecting the cell from the outer environment. So, when this biological membrane is damaged even in a single spot, nitrophenols quickly get to the cell and damage mitochondria – our genuine power plant. As that factory is damaged, the cell cannot get the energy to survive, becoming “ill” and after some time, the nitrophenol effect is fatal.

According to the lung cancer cells, the same results would be expected. These cells react differently to these hazardous compounds. Surprisingly, they treat nitrophenols as a “fuel” stimulating them to grow. Hence, more cancer cells are exposed to nitrophenol; more energy is delivered for their enormous growth leading to severe health problems.

Thanks to the researchers' findings from the ICP PAS, it is seen that the exposition on the smoke and smog has a dramatic effect leading to the development of cancer. Are you going to the barbeque or fireplace? Better stand back and avoid smoke to live long and prosper.

This work was published at Environmental Pollution on 22th February 2022.

Award in the PROPAN competition for our Institute

From chaos to complex order

Shocking paint – let’s get cell in