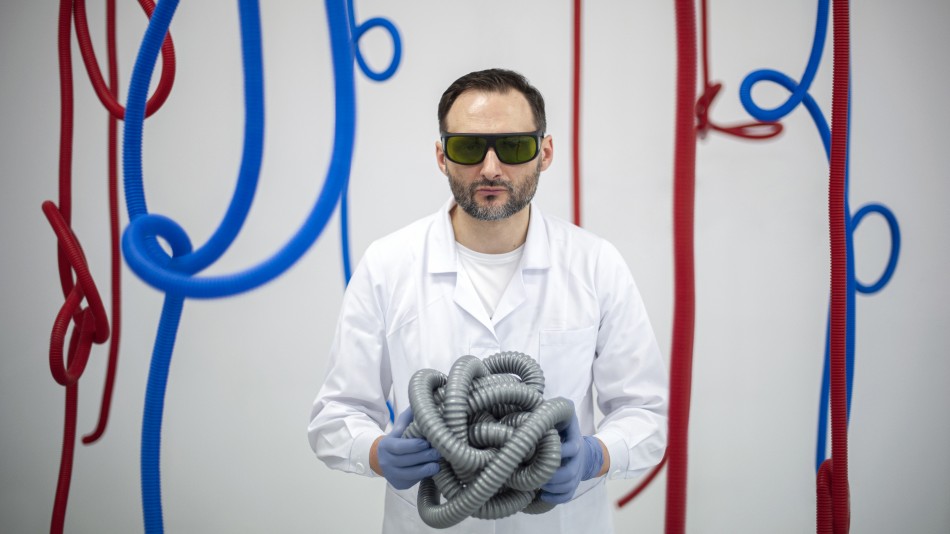 Polymer materials are used in every part of our life – from textile fibers to automotive engineering. Due to their functional properties like strength, durability, low weight, and many others, they are frequently applied in biomedicine. One such functional polymers are hydrogels capable of holding large amounts of water. Depending on the chemical formula, these polymers can change the shape under the external stimuli making them „smart,” and the secret of their behavior is hidden in their molecular structure. Recently, researchers from the Institute of the Physical Chemistry, Polish Academy of Sciences led by dr. Marcin Pastorczak presented their experimental results on the response of hydrogels to temperature changes revealing the very first moment of their chain reconfiguration from the expanded coil into a compact globule. What does it mean in practice? Let’s take a look closer at their findings.

Polymers are everywhere. They can be natural like cellulose, wool, silk, chitin, or DNA, and synthetic like polyesters or polystyrenes widely used in plastic bottles, food packaging, and even LEGO® bricks. Generally, polymers are made of long chains formed by particular molecules, while depending on the composition, they may have different properties. In recent decades, especially synthetic polymers have become an indispensable part of our life for their facile molding into shape, durability, and low weight. Some are elastic, semi-elastic, rigid, and they also can change their physicochemical features in certain conditions. Besides many types, there is a group of polymers capable of holding a large amount of water called hydrogels. These materials are widely used in contact lenses, wound dressings, or as superabsorbers in diapers for their ability to soak a tremendous amount of liquids.

Moreover, there are also smart hydrogels. They can change their properties drastically under external stimuli, including temperature, pH, light irradiation, magnetic fields, electrical fields, ionic concentration in their environment, and even in the presence of specific chemicals. Therefore, they are also called stimuli-responsive hydrogels, and that group of materials has promising applications in many fields, even biomedicine. How does it work in practice? Imagine a piece of a jelly-like hydrogel that is soaked with water that, under heating to a specific temperature, quickly pours all water. Besides the water desorption, the transparency and shape of those materials change from transparent to opaque and reduce volume even a hundred times. Thanks to their “smart” properties, when the hydrogels are cooled down, they can reversibly soak the water, expand in volume and be transparent again. For these properties, stimuli-responsive materials can find applications in artificial muscles or other actuators extending, contracting, or bending on demand. These smart materials can be used in controlled drug delivery systems, where the hydrogel can desorb a drug molecule at a particular pH in the digestive tract or under a specific temperature. They can also be applied as sensors or scaffolds for tissue engineering, while the list of their promising use is much longer.

How does this stimuli-responsiveness in hydrogels work? The mechanism is hidden in its molecular structure, and still, there is too little known about it. If we think of a single polymer chain as a long thread that expands in an aqueous environment, it has a random coil conformation. Yet, some polymers have a unique feature revealing at specific conditions. For example, the random coils of some polymers avoid contact with water in certain temperatures and change their conformation drastically. The polymer undergoes a coil-to globule transition during which the expanded polymer coils distance from the water and collapse into compact globules. That is what it looks like on the molecular scale. On a macroscale, the polymer suddenly shrinks, pouring the water. Incredibly, the materials can change their physical properties so much just within a tiny change of one parameter!

Recently, researchers from the Institute of the Physical Chemistry, Polish Academy of Sciences, led by dr. Marcin Pastorczak experimentally observed the very first moments of the polymer coil-to-globule transition. Studies were performed under the collaboration of prof. Naoki Shinyashiki from Tokai University – an expert in polymer dynamics, and dr Gonzalo Angulo – a specialist in chemical kinetics.

“As a polymer chemist, I always wondered how it is possible that by increasing a temperature of just around 0.5 °C, we can produce such massive changes in these materials. I also wondered what the actual start of this chain collapse process is when the polymer “senses” that tiny increase in temperature. When I started my work in the Laser Centre in the Institute of Physical Chemistry, Polish Academy of Sciences, I realized I was just given a perfect tool to discover the truth about that process.” – remarked dr. Pastorczak

Observation of the coil-to-globule transition is not easy, and, besides the precise temperature changes, it requires the application of extremely sensitive techniques. Scientists used ultrafast infrared laser pulses – where very short shots of light were capable of heat-up the sample by several °C within just a few picoseconds – that means in around 0.00000000001 seconds (trillionth part of the second). Their work presented coil-to-globule transition forming in the poly(vinyl methyl ether), PVME polymer heating it with a laser pulse from 35 °C to over 37 °C to force a phase transition. Each heating pulse worked as a kick to polymer chains.

Dr. Pastorczak claims - “After the heating pulse, which was like a kick to the polymer molecules, at different short moments, we watched what happened to that polymer with the use of another laser pulse (called a probe). We saw that around 300 picoseconds after heating up, the polymer started to scatter the probe laser more intensely. We knew that the coil-to-globule transition began at that very moment!”

As a result, researchers presented the initial coil-to-globule transition in PVME in water for the first time, where, after the first 300-400 picoseconds, small loops on a polymer chain are formed. These loops work a bit like nuclei in water crystallization into ice. Next, the surrounding polymers in tens of nanoseconds (one billionth part of the second) slowly aggregate around those loops, ultimately forming compact polymer globules.

“We also associated the observed time of the beginning of the coil-to-globule transition of PVME with one of the basic features of a polymer – the relaxation time of polymer segments. “ – says dr. Pastorczak.

What does it mean in the bigger perspective? Comparing shrinking properties, for now, the fastest smart hydrogels react to external stimuli within tens of seconds, while our muscles react within just tens of milliseconds, making them even 1000 times faster than smart materials. To synthesize more effective and faster artificial muscles, we need to find a way to accelerate the reaction time of smart hydrogels.

Thanks to the study of Pastorczak and his co-workers, the first stage limiting the reaction time of smart temperature-responsive hydrogels is revealed. Although such a presented experimental result is just a beginning of a long way for a scientist, thanks to their studies, the selection of polymers that can be used to obtain fast-responsive hydrogels seems will be easier.