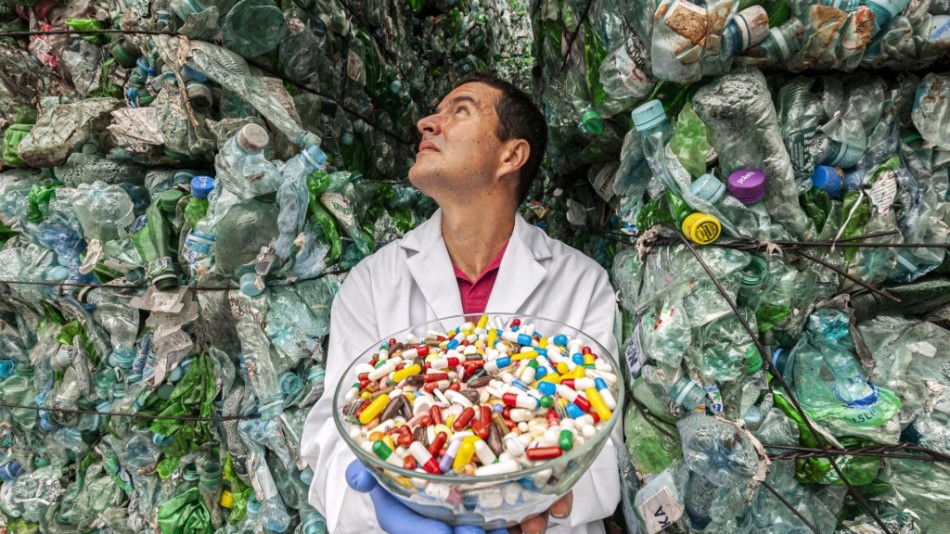 Many companies are working on materials that would be as light and resistant as plastic but at the same time fully biodegradable. What if they could be made from ….. rubbish? A modern, ecological (waste-free - the conversion of raw material to product reaches 100%) and economical (does not require high temperatures or expensive catalysts) method of obtaining organic monomers is coming into being at the IPC PAS.

It’s hard to imagine our modern world without plastics, but the plastic we know today also poses a great threat. It litters practically all corners of the earth – it can be found in the depths of the Mariana Trench as well as on Mount Everest. Each one of us, in one way or another, consumes 5 grams of plastic every week – that’s enough for a credit card - and these are not compounds that are neutral to our health.

But what if we managed to replace plastic with a material that is equally light, equally resistant and at the same time fully biodegradable? This is the idea that a team of scientists from the Institute of Physical Chemistry of the Polish Academy of Sciences (IPC PAS), led by Professor Juan Colmenares, is working on. They have taken a common product - hydroxymethylfurfural (HMF) - which on an industrial scale is obtained by the acid hydrolysis of sugars obtained, among others, from cellulose, lignin or inulin. They have turned it into aldehyde, 2,5-diformylfurfural (DFF), a compound that finds an application in so many fields of industry that it would take several lines of print to list them all. It can be used to produce medicines, cosmetics, fragrances, chemical agents, fuels, but above all - environmentally friendly plastic. "We want it to be possible to replace PETs with something that decomposes in a few months or at most a few years," explains Professor Colmenares. "Today's plastics, made from petroleum, contain phthalates and other plasticizers – a sort of "soup" of organic and even inorganic compounds - and no bacteria or fungus on their own can break them down. That’s why they remain for so long in the forests and seas. Materials produced based on DFF contain furans - sugars, and what comes from nature is better received by nature,” explains the professor. "There have already been tests of such polymers. They break down into monomers resembling sugars. And sugars are a tasty treat for many microorganisms. Even if a bottle of this sort of plastic is thrown away into the forest, it will decompose much faster than conventional polymers, after a few years at the latest."

It is not the product itself (DFF) which is new here, but the method of obtaining it, described in a paper published in Applied Cat. B. Until now, high temperatures (in the order of 100-150 degrees C) and complicated technology have been needed, which meant that though being ecological, it could not compete with petroleum products. Professor Colmenares’ team only need a box they themselves produce - a photoreactor, a light (at present this is an LED lamp emitting near UV - 375 nm, but ultimately the energy is to be provided simply by the sun) and a catalyst - manganese dioxide nanowires. "These are long and very, very thin, and their structure increases the absorption of light. Due to the unique thermo-photo-catalytic properties of manganese dioxide, the nanorods have a much larger contact surface with the particles of the starting material and are better at activating it. So, virtually all the HMF changes into DFF. 100%!” enthuses the professor. "It’s a waste-free method, without the addition of oxygen or additional compounds (e.g. hydrogen peroxide H2O2). The oxygen in the air suffices to obtain the pure monomer needed for the production of linear polymers and ... for example, bottles like this. Even the nanorods can be re-used many times as photocatalysts, because the DFF does not destroy them, it does not release manganese 2+ and 4+ ions so in addition it does not need to be purified. The conditions needed are room temperature and atmospheric pressure. At the same time, it is a very cheap and common material is used (manganese oxide is not platinum, gold or silver), and the production method is simple. They simply precipitate and all you need is to select the right conditions for the process to be efficient," says Professor Colmenares, describing the invention. "At present we are restricted by the capacity of the reactor, but when we change it to a flow reactor, we will be able to increase production greatly. And, of course, obtain a patent,” he adds.

But won't such rapidly decomposing plastic break down too quickly? Before, for example, we manage to drink the juice poured into it? "No," laughs the professor, "In practice it takes a few years to decompose, but even if the reaction occurred faster, the user would at most drink a little "good" plastic. One that is harmless to the body. Generally speaking it would simply be degraded by our intestinal bacteria and their enzymes."

In addition, the method developed by the team lead by Professor Colmenares uses ... rubbish. Something that would otherwise end up in rivers, polluting the water, or would require a high level of purification, as is now the case with the paper industry's waste. "Currently, such waste can be transformed or converted, for example, into bioethanol, or it can be burned to provide energy for production, but if it could be better used, this would be amazing. Anyway, there's enough rubbish for everything. And were it to be shown that there’s money in it, a lot of people would immediately be found to clean it up," says the professor.

Poland is, for example, a large producer of apples and juice, but do we know what happens to all that apple peel and all the waste products? Not much, although we "produce" hundreds of tons every year. "It’s poured into the waste disposal, it pollutes the water, takes up oxygen, and then it’s the end of all water life," worries the professor. "Meanwhile, it contains all the sugar, pectin and levulinic compounds that even medicines can be made from," he explains. You can make very desirable compounds from something that is made of neither oil nor coal, but from waste. This is "how to make something out of nothing".

* This publication is part of a project that has received funding from the European Union's Horizon 2020 research and innovation programme under the Marie Skłodowska-Curie grant agreement No. 711859.

Scientific work funded from the financial resources for science in the years 2017-2021 awarded by the Polish Ministry of Science and Higher Education for the implementation of an international co-financed project.