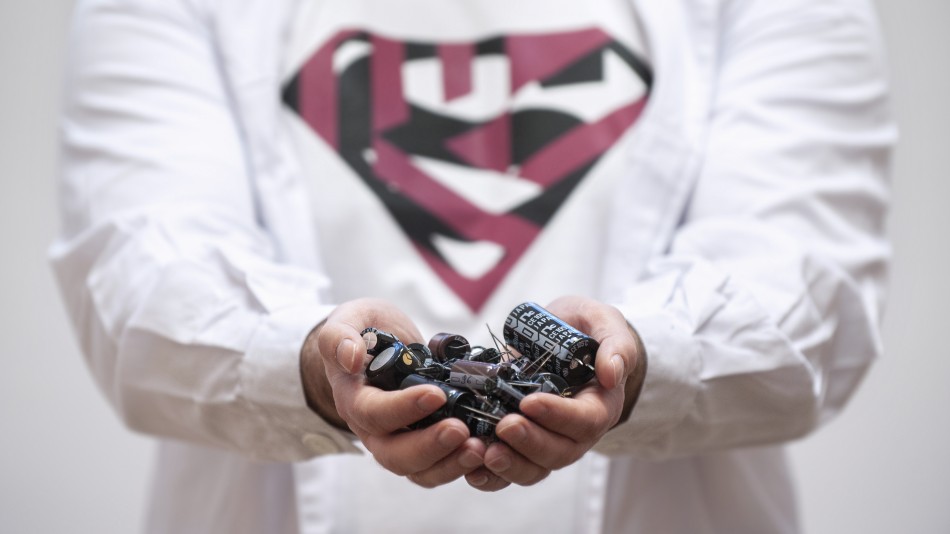 We live in modern times, that is full of electronics. Smartphones, laptops, tablets, and many other devices need electrical energy to operate. Portable devices made our lives easier, so novel solutions in clean energy and its storage are desirable. Lithium-ion (Li-ion) batteries are the most common solutions that dominate the global market and are a huge problem due to their insufficient recovery. Because of their limited power, short cycle life, and non-environment-friendly nature, scientists recently focused on novel solutions like supercapacitors that offer much more than batteries. Why? Let's take a look closer at these devices.

Supercapacitors bring together the properties of a standard capacitor and the Li-ion battery. In practice, these devices store more energy than capacitors and deliver energy faster than batteries. Their secret lies inside, hiding two essential components. The first one is two highly porous electrodes made of the material that conducts electricity; these electrodes are separated by a membrane to prevent a shortcut. The second one is an electrolyte that plays a crucial role in supercapacitors. The electrolyte has a lot of ions that are close to each other and fill the pores. There are two types of ions – positively charged called cations and negatively charged called anions. When the device is turned on (the potential difference is applied between these two electrodes), ions start to travel in and out of the pores (cations and anions move in opposite directions), and the electric current flows. One of the most commonly used materials that maintain porosity is activated charcoal. If pores are large, the device charges fast but stores low energy. If the pores are narrow, the device provides more energy but charges more slowly. Does it mean smaller is better? Yes, however, the ions' velocity thought their travel in the pores needed to be accelerated.

Recently, an international group led by Svyatoslav Kondrat from the Institute of Physical Chemistry, Polish Academy of Sciences (IPC PAS) presented research work describing how to speed up ion transport in narrow pores. Why? To charge the supercapacitor faster. First of all, researchers focused on the theory. They presented slit-like pores with a size of about 0.6 nm, that is, 0.6 meters divided into billion pieces, just slightly larger than the ion itself, while its length was below 20 nm. What a small size! It is even smaller than viruses. When the electrodes are polarized (the external potential is applied to electrodes to push ions in particular directions), the ions outside of the pores rush to the pores. Imagine that they move like cars on a highway, entering a very narrow tunnel. However, instead of two, three, or four lanes going opposite directions, all lanes are merged. When cars go fast, the highway is very crowded, and they may quickly block the tunnel and get stuck in traffic. The same happens to ions. When the potential difference applied to an electrode is varied too fast, ions entering the electrode's pores block the ions who try to leave the pores. In this way, the pores are clogged. What does it mean in practice?

The bad news, it means slower charging (lower power density) of the supercapacitor. The researchers proposed the solution: Let's not push ions too fast but, well, also not too slow; let's adjust the velocity by a tiny step rate. Based on their idea, they performed multiple complex computer simulations that gave promising results. That was a theory. What about practice? Svyatoslav Kondrat says, "We had the simulation results, and we were curious how it works in practice." Experiments performed in Volker Presser group (INM, Saarbrücken) used highly porous electrodes filled with ions. Researchers have shown that ions can travel quicker without pore-clogging when treated with tiny electrical impulses instead of abrupt charging or discharging. This way, they found how to accelerate the charging and discharging processes even if the electrode's pores are as narrow as just 0.6 nm. The research was done under an international collaboration and reported on November 30 in the journal Nature Communications.

Svyatoslav Kondrat says, "The results are encouraging. It is exciting that also discharging can be accelerated. It is like making your cars leave the tunnel faster, even though you have control only over the cars outside of the tunnel. This is relevant for some processes like capacitive water desalination, where operation speed is very important".

Their findings open up new opportunities to tremendously accelerate charging and discharging even in subnanometer pores. This approach to the novel solution application can provide a new path for more widespread use of these environmentally-friendly electrochemical devices.