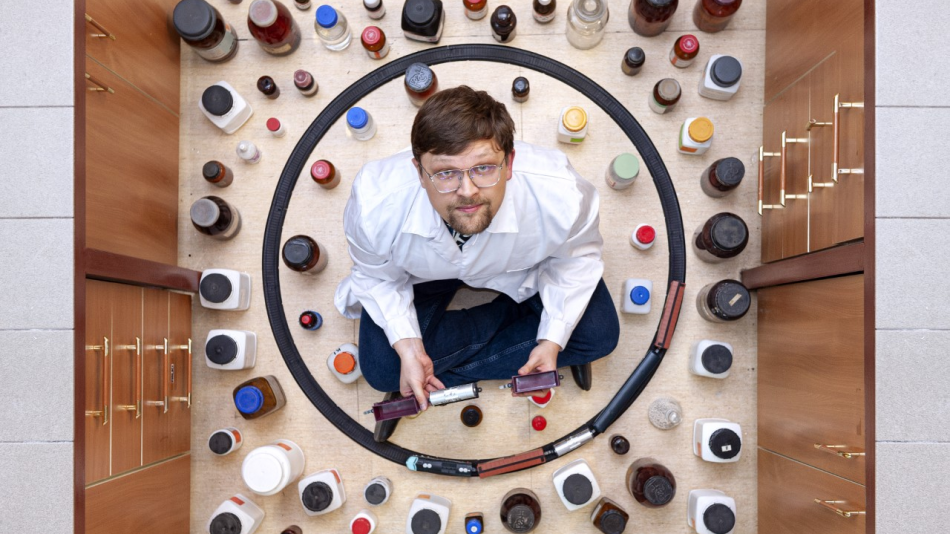 Science is fantastic and never stops to surprise us. Curiosity, with the support of modern devices used to pursue research, boosts the number of discoveries. No matter what hypothesis we have, sooner or later, some researchers will investigate it. Recently, even a complex photopolymerization reaction became powerless in facing the powerful tools proposed by curious scientists. A novel time-resolved NMR method combining time-resolved diffusion NMR and time-resolved nonuniform sampling demonstrated by researchers from the Institute of the Physical Chemistry, Polish Academy of Sciences is one of them and makes the life of chemists easier. Let’s take a look closer at that unique method.

It has been just over a century since the technological revolution, and the instruments that developed scientific observations are more complex than ever. For example, consider the light and its measurements. Simply saying, it is made of electromagnetic waves having different wavelengths. Outside the visible range, there is infrared radiation that can be easily measured, for example, with coarse diffraction gratings on air. On the other side, shorter waves can also be measured, while as the air adsorbs, some UV radiation would need a vacuum condition to reduce this effect. So, depending on the goal of measurement, the operating conditions can vary. Our knowledge about the measurements is still growing and is based on extracting general rules from experiments. What about the observation of chemical reactions? It seems to be easy for the various instruments used by researchers, while all depends on the complexity of the investigated processes. For instance, the design of novel functional materials is not easy. It needs a comprehensive insight into the processes in which these materials are prepared or modified.

In many cases, using electromagnetic wave interactions with matter can be insufficient to explore some processes. Therefore, some other magnetic nature of the nucleus, where each one can be treated as a tiny magnet, can be used. Thanks to the creation of the magnetic field by the electrons orbiting around the nucleus in an external magnetic field, the chemical composition or even mechanisms of chemical processes can be determined.

As the local magnetic field of the nucleus depends on the element's chemical character, like configuration, molecular structure, or even intermolecular interactions, the chemical structure of the samples can be investigated with the Nuclear Magnetic Resonance technique, simply called NMR. It is one of the most comprehensive delivering in-depth insight into molecular structures.

Recently, researchers from the Institute of the Physical Chemistry, Polish Academy of Sciences, led by Dr. Mateusz Urbańczyk, proposed a boosted NMR setup for detailed studies of complex chemical processes with high resolution and real-time monitoring. Scientists proposed combining two novel time-resolved NMR methods to make it possible to measure the average diffusion coefficient of the particular chemicals and the formation of products of the reaction at the same time. The average mass of the chemicals in the investigated process was determined based on these two methods, time-resolved diffusion NMR and time-resolved nonuniform sampling. Even complex processes like polymerization, photopolymerization, or complexation can be explored in detail.

“In our work, a photopolymerization of bis-anthracene-based systems was chosen. The system is very interesting for employing building blocks during polymerization that can be helpful for the design of various photofunctional materials” – says Dr. Urbańczyk

To show the potential of the technique, the photopolymerization of an aromatic bis-anthracene derivative - N,N-bis(anthracen-9-ylmethyl)butane-1,4-diamine (H2banthbn) was investigated, presenting the feasibility and advantages of the proposed method. As photopolymerization is dependent on experimental conditions and can undergo different pathways for different chemicals, for its complexity, such a type of chemical reaction was chosen.

“The synergy between both time-resolved methods allows us to understand the photopolymerization process of H2banthbn. Using only diffusion methods, we would have only a crude idea about the average mass of the system, and obtaining the information about particular n-mers would be close to impossible.” – claims Dr. Urbańczyk

Considering both methods separately – based on the diffusion coefficient of particular chemicals, the number of a single molecule called mers during polymerization changes, making it difficult to determine the mechanism with measurement of only such a parameter. It is challenging to follow the evolution of particular polymers but easy to establish the average mass of the reacting mixture. Therefore, it would be impossible to evaluate the kinetics of the chemical reaction, like the lifetime of the particular dimer, trimer, or even larger molecules during the process.

Coupling this method with time-resolved sampling, where the whole data are divided into particular sets and classified, it is possible to ascribe every single peak that is recorded during complex processes in real-time. Bringing together different methods helped to provide a correlation between particular features of the studied system and information that cannot be obtained when employed separately.

Dr. Urbańczyk remarks - “The presented comprehensive methodology was demonstrated on a challenging system in terms of concentration, line widths, and magnetic field. The presented approach is general and can be used for different types of chemical reactions, especially the polymerization reactions and photoreactions.”

Thanks to the method proposed by the team of Dr. Urbańczyk, the use of both methods allows for a better understanding of the mechanisms of chemical reactions, especially polymerization and photopolymerization, in real-time, delivering precise data about the presence of particular molecules in the system.

This work was funded by the National Science Centre, Poland, within the OPUS Grant (2021/41/B/ST4/01286) and authors of research like to thank the European Union’s Horizon 2020 research and innovation program under the Marie Skłodowska-Curie grant agreement No. 847413 and the international co-financed project founded from the program of the Minister of Science and Higher Education entitled “PMW” in the years 2020–2024, agreement no. 5005/H2020-MSCA-COFUND/2019/2.

A new way to monitor blood flow in the brain. The πNIRS technique could...

From capturing energy to capturing the Dream Chemistry Award 2022