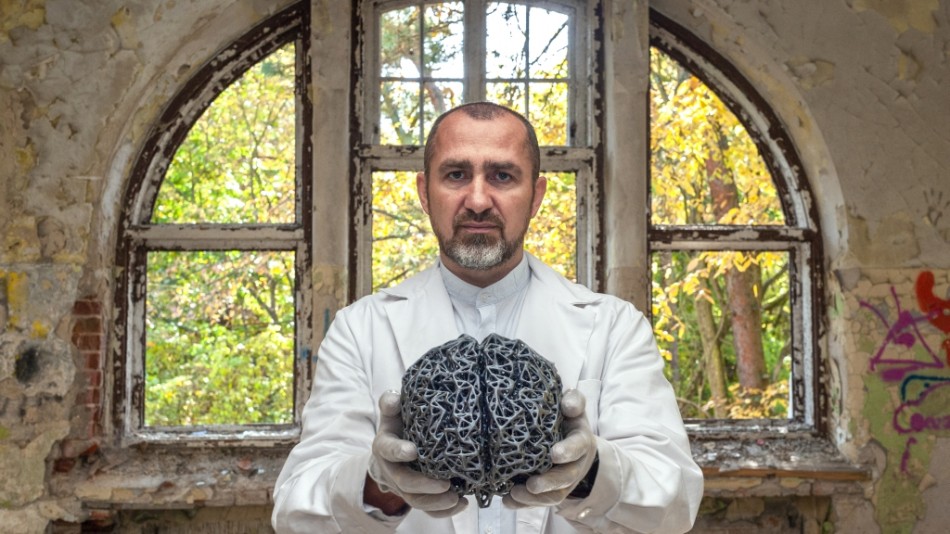 Alzheimer's disease and the accompanying personality breakdown frighten many of us. Unfortunately, the drugs currently available are ineffective. Thanks to the work of a team headed by Dr. Piotr Pięta of the IPC PAS, it may be possible to develop new and more effective pharmaceuticals to fight this disease. The scientists have shown how the size of beta-amyloid molecules affects the way they interact with model brain cell membranes. The next research step is to test potential drugs to understand their influence on the interaction of beta-amyloid with brain.

One of the tasks of the scientists work is to explain how the world functions. Their research ideas often seem being unrealistic but, as it turns out, their research may truly help a great many of us. This is the case with the research work of Dr. Piotr Pięta’s team at the IPC PAS. He has shown how the size of the molecules of beta-amyloid - a compound considered to be the ‘culprit’ in Alzheimer's disease - influences the way these molecules interact with cell membranes.

The IPC scientists work on synthetic, model cell membranes built as simply as possible but, at the same time, similar to those found in the human brain. These membranes consist only of a mixture of phospholipids (without receptors or other membrane proteins), thus allowing the researchers to focus solely on how various molecules affect the barrier that ensures cell stability. "We wanted to know what beta-amyloids actually do to these membranes," explains Dr. Pięta. "Do they adsorb on the membrane surface, do they destroy or dissolve them, and if they dissolve them, why and how....?".

There are a lot of questions - the answers are only just becoming apparent. "In our studies, we've managed to monitor the size of beta-amyloids oligomers, that is, molecules made up of several amyloid molecules. That way we've been able to see how this size affects the mechanism of their interaction with the model membrane," says Dr. Pięta. In the initial research on Alzheimer's, studies were undertaken on the brains of people who were ill, or in fact had already died from the disease. The brains contained deposits of long threads - fibrils - and for many, many years it was believed that these fibrils were the main pathogen.

Recent studies however, including those conducted by Dr. Pięta, show something else. It is not the long fibrils that are the culprit, but rather their precursors - the oligomers of beta-amyloid. Amyloids are produced continuously in each of us from membrane proteins, they are cut off enzymatically. Problems arise when the mechanisms that regulate their quantity and ‘appearance’ cease to work. Non-toxic amyloids contain 39-43 amino acids and their secondary structure is of an alpha-helix (a shape slightly resembling a DNA chain). The ‘bad’, altered structures look a bit like accordion folds. The worst ones are those with 42 amino acids molecules. "Using atomic force microscopy, we accomplished two types of measurements, one for small oligomers with diameters of around 2 nm and the other for slightly larger ones with diameters of around 5 nm," explains the scientist. "It turned out that small oligomers work in a manner completely different than large ones.” The large ones, after deposition on the membrane, aggregate to form long fibrils. All the phenomena that occur with their participation take place on the surface of the model cell membrane and do not lead to membrane destruction. Small oligomers are a completely different story. They destroy the membrane. "At first, they create holes of various sizes and shapes in the membrane," explains Dr. Pięta. "Once a hole is drilled, small oligomers enter the membrane and together with the membrane phospholipid molecules form globular micelles. These micellar complexes diffuse outwards, thus removing phospholipids from the membrane and leading to its dissolution. The mechanism of interaction with the membrane changes with the change in size of oligomers. Nevertheless this interaction causes a decrease in mechanical durability of the membrane by about 50% in the case of both amyloids. In other words, both small and large oligomers are toxic, although their mechanism of action is different. “Our research explains these mechanisms and reconciles conflicting reports published in the literature", the researcher explains.

"For the time being, we are only explaining the basic mechanisms," says Dr. Pięta, "But in the next stage of our research we will add molecules of drugs to this system and see which of them can modify the interaction of amyloid with the membrane and, therefore, perhaps, the course of the disease. We will investigate molecules that could, for example, deactivate beta-amyloid by attaching themselves to it before it destroys the membrane. We have started cooperation with pharmacists and biochemists. We can suggest to them whether their medicines interact with amyloids on the membrane surface, and if so, at what level and how they should behave in order to, for example, increase the durability of the cell membrane,” concludes the scientist.

The research carried out at the IPC PAS will certainly contribute to a better understanding of the mechanisms leading to Alzheimer's disease, and may thus revolutionize the way it is treated.

This publication is part of a project that has received funding  from Polish National Science Centre, grant no. OPUS12 2016/23B/ST4/02791 and the European Union's Horizon 2020 research and innovation programme under the Marie Skłodowska-Curie grant agreement No. 711859. Scientific work funded from the financial resources for science in the years 2017-2021 awarded by the Polish Ministry of Science and Higher Education for the implementation of an international co-financed project.