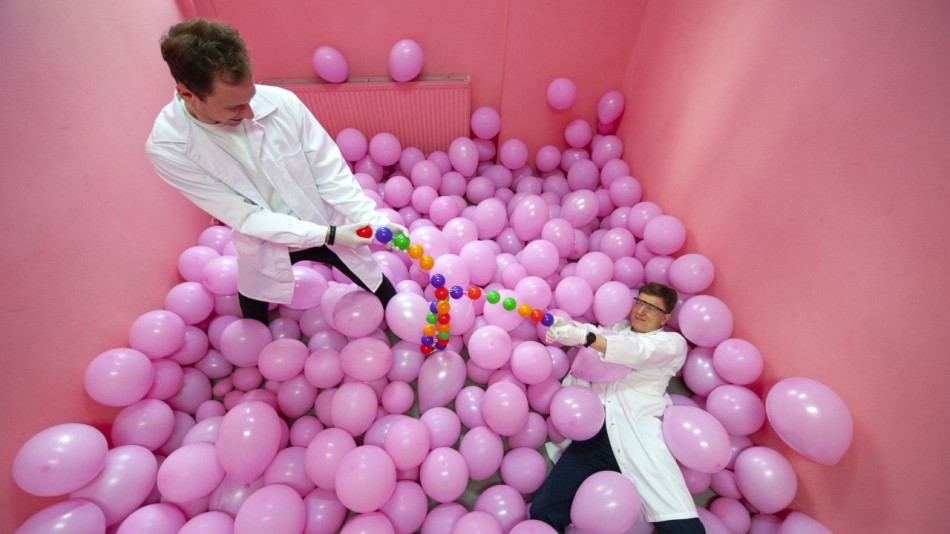 Cells produce many different complexes. They can occupy even 40% of the cell’s volume making cell quite a crowded environment. For that reason, a full description of complex cellular behavior seems to be challenging mystery which requires deeper investigation. To mimic the crowded nature of the cell, researchers usually apply chemically inert molecules like non-ionic polymers making solutions that work as obstacles for biologically active molecules while reacting. However, these inert compounds are not as inert as they should be. As it turned out, they tend to “steal” ions and that is quite a severe problem for the researchers. Even a minor change of the ions concentration in the cell can dramatically affect biochemical reactions. Recently, scientists from the Institute of Physical Chemistry, Polish Academy of Sciences, led by prof. Robert Holyst, presented research that brings us closer to understanding up to 1000-fold changes in the equilibrium constants of biochemical complex formation occurring in very crowded environment.

Our body is made of many complex structures working together. It contains trillions of cells – essential building blocks - and each one of them is specialized in a different function. Their internal mechanisms are not yet fully understood, especially when it comes to the specific interactions between particular molecules. Moreover, the mechanism depends on the ions concentration in certain area in the cell. Since our body deals with billions of such operations every second, we do not even notice them. Biochemical reactions taking place inside a cell frequently depend on the ionic strength that defines concentration of ions in a given part of the cell. Therefore, the balance of the formation of many biochemical complexes, e.g. protein-protein, protein-RNA complexes or the formation of a DNA double strand, may significantly change depending on the ionic strength. Moreover, the crowded nature of the cell also has an influence on such chemical processes.

Let's take a closer look at the cytoplasm inside the cell. It can be compared to a pool full of components of different sizes and shapes. Besides water, cytoplasm also contains ribosomes, small molecules, proteins or protein-RNA complexes, filamentous cytoskeletal components, ions, and cellular compartments (e.g., mitochondria, lysosomes, nucleus etc.). This makes the cytoplasm quite a complex and crowded environment. In such conditions, each parameter like ionic strength or pH can significantly impact the biology of living cells. One of the mechanisms keeping the proper balance of ions in the cell are sodium-potassium pumps placed in the biological membranes of living human’s cells. They constantly regulate the ions’ level inside of each cell.

Classical approaches for the determination of the cellular mechanisms are quite often based on the measurements performed in an artificial environment with the use of many chemical compounds mimicking the cells’ interior. So far, research into the exact course of cellular mechanisms is severely distinct from the processes occurring naturally, especially when interactions between macromolecules are concerned. Investigation of the biochemical complexation processes is challenging, especially in the external conditions where the ions present in the used solutions also affect the final experimental results. To mimic the crowded cellular environment many different chain-like molecules like polyethylene and ethylene glycol, glycerol, ficoll, and dextrans were used in high concentrations (even at 40-50% mass of the solution)  to serve as viscous media. Why are they so popular? Because of their inert nature. However, recent studies show that this property is a bit different than we think. Surprisingly, they can “steal” ions during biochemical reactions.

Researchers from the Institute of Physical Chemistry, Polish Academy of Sciences led by professor Robert Holyst presented a new approach in this field. They investigated the hybridization of the DNA. As this complex reaction is sensitive to the concentration of ions due to the charging of double helix strands in certain surroundings, it was selected a good indicator for this experiment. Based on that model, the researchers investigated the complexation of particular ions like sodium Na+ in the presence of different molecules while maintaining a crowded environment. They also changed the viscosity of the solution by using molecules increasing crowding.

“We explored a complex biochemical reaction in function of the ionic strength that describes ions concentration in the solution and the effective electrostatic repulsion distance between particular molecules” remarks Krzysztof Bielec – the first author of the article describing the team’s findings.

The conducted experiments have shown that the interactions between the molecules are enhanced at a higher salt concentration. Moreover, the addition of polymers increasing the molecular crowding and the viscosity to the reaction environment also influences the dynamics of biochemical processes, hindering the formation of complexes. In a crowded environment, the complexation can be even 1000 times less favorable than in pure buffer. These results show that the biochemical reactions can be disturbed even with minor changes in the experimental conditions.

Krzysztof Bielec claims: „The formation of a double-stranded DNA backbone is based on electrostatic interaction between two complementary, negatively charged strands. We monitored the effect of the crowded environment on the hybridization of complementary strands in the nanomolar biochemical concentration regime, and then, we determined the complexation of sodium ions by crowders. Next, we determined sodium ions complexation depending on the crowding environment. The binding site for cation within the crowder structure may differ even between crowders of the same binding moiety (functional group). Therefore, we calculated the interaction with crowder per molecule or monomer (in the case of polymers). This model simplifies the interactions between ions and crowder molecules”

Much to the researchers' surprise, it turned out that commonly considered non-reactive non-ionic polymers used to mimic cytoplasmic conditions can complex (in a sense, “steal”) the ions necessary for effective DNA hybridization. Although it is not a dominant interaction between these polymers and ions, when a huge concentration of polymers (several dozen percent of the solution mass) is used, the effect is noticeable and important for the course of biochemical processes.

By determining the stability of the complexes formed in the presence of particular crowders, the authors claim they can demonstrate the influence of the ions on the molecular level mimicking nature. These experiments shed light on the unclear mechanisms in the cells and point out the importance of the deeper analysis of the reactions investigated in the artificial environment.

Thanks to the results presented by researchers from IPC PAS we are a step closer to understanding particular molecular processes in living cells. A detailed description of the mechanisms on a molecular scale has practical implications; for example, it is extremely important for designing new medicines, especially for predicting particular processes that occur in the crowded cells during the treatment. It can be helpful in the precise planning of the experiments in. This work was published in The Journal of Physical Chemistry Letters.

This work was supported by the National Science Centre, Poland, within the grant Preludium Bis 2020/39/O/ST4/00877.