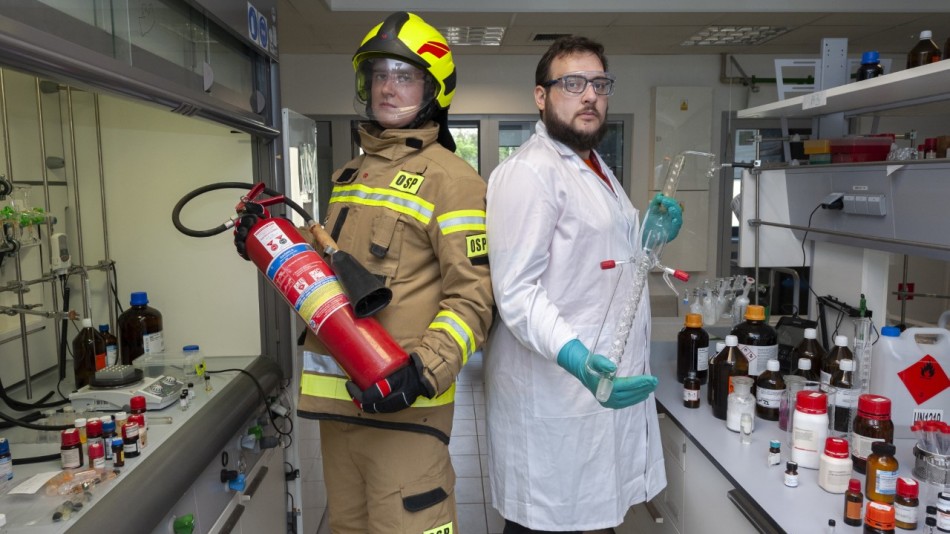 Since the technological revolution, we live faster than ever before, use much more items in everyday life than we need. As an effect, we produce a tremendous amount of emission gases that have a dramatic impact on the environment. Once released into the atmosphere, they easily spread and increase the formation of smog, adversely affecting the respiratory system. Therefore there is a deep need to store emission gas like carbon dioxide (CO2). Recently, researchers from the Institute of the Physical Chemistry, Polish Academy of Sciences, collaborating with researchers from foreign institutions, presented a facile way to deal with carbon dioxide. Let’s take a look closer at their discovery.

Anthropogenic activity has resulted in a rising dramatic scale of the CO2 emissions, leading to global warming, climate change, severe environmental problems, and even health issues. One possible way to counteract this is to capture carbon from the atmosphere, but current methods dealing with that problem are energy-consuming and still ineffective. Carbon dioxide is well-known as a greenhouse gas, easily released through human activities such as industrialization, burning fossil fuels, and deforestation. The low reactivity of CO2 makes it difficult to quickly trap and convert into other chemical compounds, especially the materials that would store it for a long time. Therefore, due to its specific molecular structure, it absorbs and emits a heat known as infrared radiation, and as an effect, it is responsible for warming the Earth's surface and the lower levels of the atmosphere. There is a deep need to find novel ways its capture carbon dioxide emitted from various sources, including industrial and energy-related sources before it reaches the atmosphere. Besides many techniques, the use of novel, porous materials that could selectively trap researchers has been widely developed.

Recently, researchers from the Institute of the Physical Chemistry, Polish Academy of Sciences (ICP, PAS), led by Prof. Janusz Lewiński under the collaboration with international researchers, presented a facile way to catch CO2 and use it as an ingredient to create highly porous materials. Moreover, all without producing the post products that are usually produced within the classical wet syntheses. The proposed mechanochemistry tools make it possible to activate chemical reactions by overcoming the energy barrier with mechanical forces. In other words, they have used a mechanical trigger to prepare materials enhancing wet chemistry synthesis, where the harder ingredients are ground, the quicker the materials are obtained. Despite the simplicity of the mechanochemical reactors, they are a powerful tool offering a green approach to fabricating diverse molecular compounds without any additional chemicals during synthesis.

Researchers tested several ingredients within mechanochemical tools investigating the effect of the experimental conditions on the composition of the product, while the molecules being used as a source were carefully selected. Therefore, prof. Lewiński’s team proposed a nitrogen-based organic molecule called 1-(o-tolyl)biguanide (otbg) for its unique chemical composition, offering a functional group that can bind CO2. Initially, they tested its trapping process in a solvents mixture, namely acetonitrile, and water, in the presence of the otbg, exposing the solution to the gas. Then, tetrahydrofuran was used instead of acetonitrile, resulting in the fabrication of a completely different product. They found that the selectivity of carbonate vs. bicarbonate formation in the solution-based method is related to the type of used solvent. It is exciting that the mechanically boosted synthesis works so effective compared to the classical wet method.

“Encouraged by the observation of extended hydrogen-bonded network, we wondered if applying the mechanochemical approach could influence the reaction pathway and lead to formation of different products.” – claims dr. Michał Leszczyński, the first author of studies.

The obtained materials bind CO2 within hydrogen bonds, making it strong enough to trap it in the final product. Interestingly, this method can also be used with other gases making it possible to reduce much more chemicals in the atmosphere. Moreover, the lack of harmful waste makes syntheses not only greener but also economical with a high yield of synthesis.

The group of Prof. Janusz Lewinski was the first to present that the CO2 can be captured mechanically and incorporated into the structure of the new, porous material. It shows the potential of mechanochemistry in the development of the complementary strategy to classical wet synthesis with the application towards the reduction of emission gases. Moreover, different products can be obtained selectively.

“We demonstrate that in solution, the formation of the carbonate vs bicarbonate networks can be directed by the organic solvent, while, remarkably, in the liquid-assisted mechanochemical synthesis employing the same solvents as additives, the selectivity in network formation is inversed. In general, our findings support the view of mechanochemistry not only as a sustainable alternative but rather as a complementary strategy to solution-based synthesis.” – remarks dr. Leszczyński

This work highlights the facile, cost-effective, and facile way to create new porous materials as a way to trap CO2 and convert it into useful materials. Moreover, it opens up an avenue for future research into carbon capture materials. Thanks to the interdisciplinary approach, the selectivity was successively revealed.