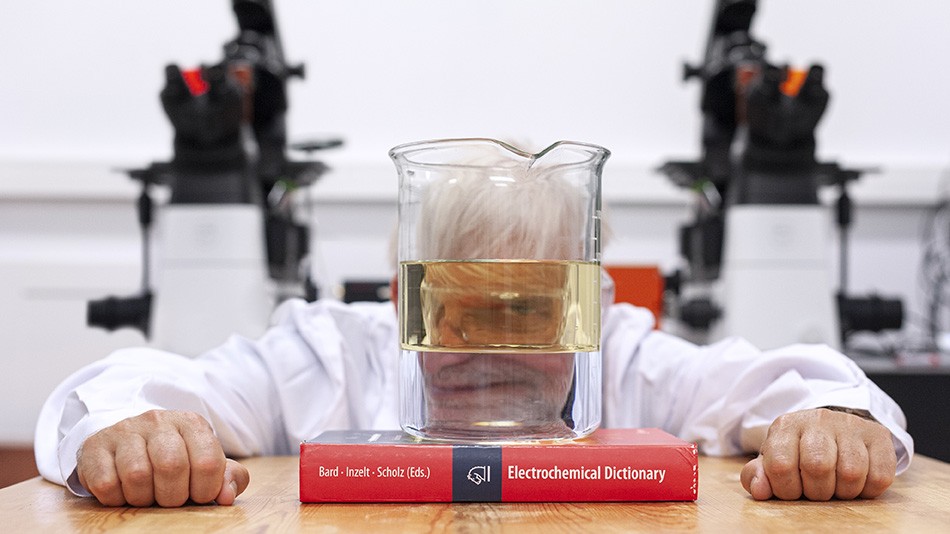 As the energy consumption in the world is growing, shortages of power are becoming more and more frequent. Solving this problem will inherently require new solutions. Some methods proposed to deal with this issue are based on chemicals recognized as promising candidates for producing power with minimal environmental impact. Among many compounds, hydrogen peroxide (H2O2), commercially available since the nineteenth century, has drawn scientists' attention to its versatile properties. Recently, researchers from the Institute of Physical Chemistry, Polish Academy of Sciences, presented a deep investigation of H2O2 generation at the boundary between two immiscible liquids like water-oil interface, showing key factors influencing the yield of the O2 reduction to H2O2.

The demand for energy consumption, limited availability of fossil fuels, and pollution caused by the energy production industry challenge scientists to find new, more cost-effective, and greener solutions to produce power. Most of the current energy sources are far from being environmentally friendly. In this context, electrochemically assisted generation of chemicals, at first glance, would not be suspected to have any tremendous potential to be applied in this sector.

One of the promising compounds is a carbon-free molecule of hydrogen peroxide (H2O2), having strong oxidative and bleaching properties. Most of us remember that 3-6% H2O2 was used for antiseptic applications: disinfection of the skin to prevent infection in the case of minor cuts. However, as an oxidizing agent, hydrogen peroxide is widely applied in pulp, paper, and textile industries; it is also used for deodorizing, e.g. as a substitute for chlorine in sewage and drinking water treatment.

Despite its popularity and availability, the use of H2O2 solutions to the treatment of cutting-edge wounds is no longer recommended. However, hydrogen peroxide is used propellant in liquid fuel rockets, satellites, and even torpedoes. It also can be applied as fuel or oxidizer in fuel cells, although its production is far from sustainable and green. Usually, the production of this compound requires using hazardous chemicals, making an industrial-scale synthesis of H2O2 a global challenge. Thus, novel solutions for its generation are needed.

Recently, scientists from the Institute of Physical Chemistry at the Polish Academy of Sciences led by prof. Marcin Opallo, in collaboration with prof. Hubert H. Girault from Ecole Polytechnique Federale de Lausanne, reported detailed studies about hydrogen peroxide generation via oxygen reduction reaction (ORR) at the boundary between two liquids, like the water-oil interface. The first one is an aqueous acid solution, and the second is a water-immiscible solvent consisting only of ions: a so-called room temperature ionic liquid. In their report, which is a significant part of Ph.D. Thesis of its first author, dr. Justyna Kalisz, they compared their data with results obtained at the interface formed by molecular solvents typically having much smaller viscosity.

Researchers pointed out that the solvent effect that may help to understand the mechanism of H2O2 generation. Comparing data for oil-water interfaces formed by thirteen ionic liquids and molecular solvents with viscosity differing by three orders of magnitude, they concluded that it is not the reactant transport but ORR kinetics that controls the efficiency of H2O2 generation. They also found that interfacial ion transfer accompanying the electron transfer from the donor dissolved in the oil phase is different for ionic liquids and molecular solvents.

„In this work, we have demonstrated that the type of ionic liquid affects the rate of O2 reduction to H2O2 at oil - water interface, finding that H2O2 generation is more efficient when ionic liquid consists of less hydrophobic cations.” – claims prof. Opallo.

He adds: “We have also demonstrated that application of a paste prepared from carbon powder and ionic liquid as oil phase allows for electrochemical regeneration of electron donor to increase interfacial reaction efficiency.”

The generation of hydrogen peroxide was investigated with Scanning Electrochemical Microscopy (SECM). This technique allows for local determination of the concentration of the electroactive product of the interfacial reaction, here H2O2. An electrode (with the diameter measured in tens of micrometers) slowly approaches the interface, and the current corresponding to oxidation process at the tip of the SECM probe is recorded. The efficiency of the reaction is estimated from the dependence of the current on the distance from the liquid-liquid interface as a function of time.

Prof. Opallo remarks: „On the basis of SECM data, we have found that the net process is controlled by the kinetics of oxygen reduction reaction. Remarkably, the high viscosity of ionic liquids allows for application of a paste (prepared from carbon powder and ionic liquid) as oil phase for electrochemical regeneration of electron donor, to increase interfacial reaction efficiency.” In this respect, the studied system can be considered as an example of homogeneous redox catalysis.”

The study reported in the ChemPhysChem journal reveals the complexity of reactions at the liquid-liquid interface. Contrary to the electrode-solution interface, the researched interface is self-healing and difficult to contaminate. Its application for the generation of chemicals is still in its infancy, but it may have a promising future. Apart from hydrogen peroxide, hydrogen generation, primarily driven by light, is another example. However, this is another story.

Project PSPB-035/2010: “Electrocatalysis at Droplets” was supported by a grant from Switzerland through the Swiss Contribution to the enlarged European Union.

Prof. Krzysztof Palczewski awarded by the American Society for Pharmacology...

How to assess if photoreceptors are functioning properly - Breakthrough...