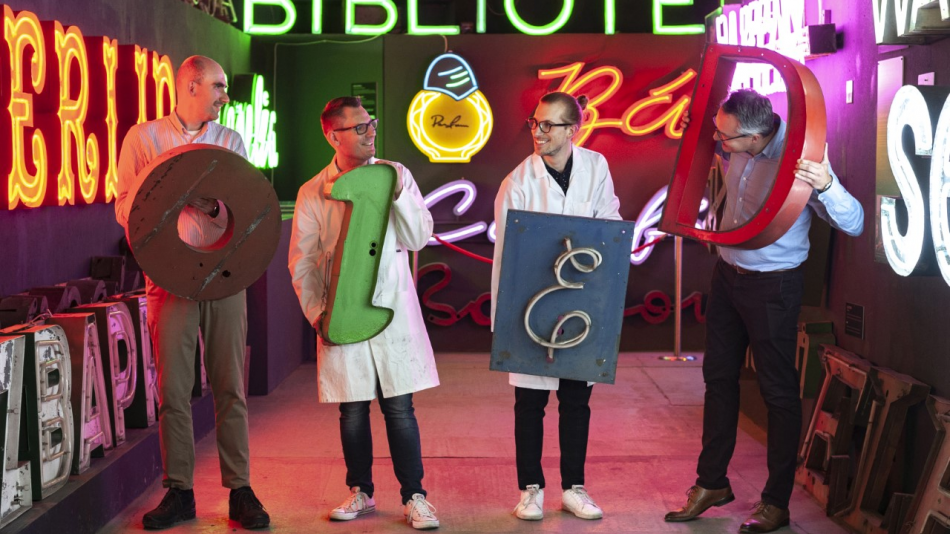 Electronic visual displays have come a long way since the early days of cathode-ray tubes. Modern display devices, based on organic light-emitting diodes (OLEDs), are compact enough to accompany us wherever we go, in portable devices such as smartphones and smartwatches. Still, there is a need for further improvements in the performance of OLED-based displays, especially regarding energy efficiency and color purity, both of which directly impact power consumption. Recently, a team of researchers from the two institutes of the Polish Academy of Sciences (PAS), Institute of Physical Chemistry PAS and Institute of Organic Chemistry PAS, and from the Silesian University of Technology proposed a series of new chemical compounds to serve as the emitters of OLEDs, taking us one step closer towards robust and sustainable technologies in portable electronics. Let’s take a closer look at their discovery.

Electronic visual displays are ubiquitous in our daily lives, to the extent that would have been unimaginable even a few decades ago. Until the early 2010s, most portable devices used liquid-crystal displays (LCDs), which are fundamentally limited by the fact that they produce no light of their own, but rather, they filter the light emitted from a backlight. As a result, LCDs are relatively bulky and tend to suffer from poor contrast between light and dark. On the other hand, OLED-based displays emit light by themselves, without needing a backlight. Therefore, they can be made thinner and lighter and achieve higher contrast than LCDs.

The light-emitting component of an OLED is an organic semiconductor layer sandwiched between two electrodes, one of which is transparent so as to let light pass through. The color of the emitted light depends on the composition of the semiconductor layer – different emitter compounds give rise to different colors. Currently, commonly used emitter compounds include heteroaromatic compounds and polycyclic aromatic hydrocarbons (PAHs), which give rise to bright emission, but at the cost of low color purity. Moreover, many of these compounds suffer from poor chemical and thermal stability, which significantly complicates processing and contributes to the high cost of manufacture. Hence, there is still plenty of room for improvements in the design of emitter compounds.

Faced with these challenges, scientists from three leading research institutions in Poland have teamed up to propose novel molecules for application as OLED emitters. Their research consortium was initiated by dr. Marcin Lindner of the Institute of Organic Chemistry, Polish Academy of Sciences. This project was set into motion when he designed a series of potential new emitters based on aromatic electron-donating and -accepting moieties bridged by an antiaromatic seven-membered ring. The inspiration for this design was provided by the observation that many existing emitters feature a direct linkage between the donor and the acceptor moieties, but that arrangement brings with it certain advantages. What if the donor and the acceptor moieties were instead connected by an antiaromatic ring? Another innovative aspect of dr. Lindner's design is the choice of the electron-donating group: a nitrogen-doped (or, N-doped) PAH moiety. The nitrogen doping causes the molecular skeleton to adopt a slightly concave, bowl-like geometry, which helps reduce undesirable stacking interactions in the condensed phase.

Dr. Lindner says, "The basic design of our N-doped PAHs turned out to be quite flexible, and their properties are very responsive to the choice of the electron-accepting group. For example, we can tune the emission mechanism between thermally activated delayed fluorescence (TADF) and room temperature phosphorescence (RTP). This gives us a high degree of control over the emission profile."

After the N-doped PAHs were synthesized by dr. Lindner's research group, their optical and electronic properties were thoroughly characterized by prof. Przemysław Data, a spectroscopist from the Silesian University of Technology. Notably, prof. Data's research group recorded the emission spectra of the N-doped PAHs in various sets of conditions and measured the energy levels of the molecular orbitals.

Moreover, prof. Data's group fabricated prototype OLEDs that incorporated the new compounds and measured their external quantum efficiencies (EQEs). Rewardingly, it was found that the best-performing N-doped PAH achieved an EQE of 12%, higher than existing donor-acceptor emitters of a similar type.

The experimental work was complemented with quantum chemical calculations by the team led by dr. Adam Kubas, a theoretical chemist from the Institute of Physical Chemistry, Polish Academy of Sciences. Dr. Kubas and his group ran state-of-the-art computer simulations of the structures and properties of the N-doped PAHs. Their simulations provided some insights which would have been inaccessible to experiment alone.

"In terms of electronic structure, the N-doped PAHs are quite exotic. The presence of the seven-membered ring between the donor and the acceptor moieties partially, but not completely, decouples the two. Consequently, these compounds exhibit small but positive singlet-triplet energy gaps, which facilitates emission by TADF." – explains Michał Kochman, a postdoctoral researcher in the group of dr. Kubas.

The full results of this study were published in Angewandte Chemie. However, the story doesn't end there: the research consortium continues its efforts to develop improved emitters for energy-efficient OLED displays. The team believe we will soon hear about the second generation of N-doped PAHs with even better characteristics. The key reason for such rapid progress achieved is the involvement of specialists from several different areas who bring in diverse skills and expertise.

Dr. Kubas agrees: "High-quality science needs an interdisciplinary attitude. In our research project, the close cooperation between experimental chemists and theoreticians has created some promising new materials with excellent optoelectronic properties. Above all, we could demonstrate a completely new paradigm for the design of strongly emitting N-doped PAHs."

Prof. Krzysztof Palczewski awarded by the American Society for Pharmacology...

How to assess if photoreceptors are functioning properly - Breakthrough...