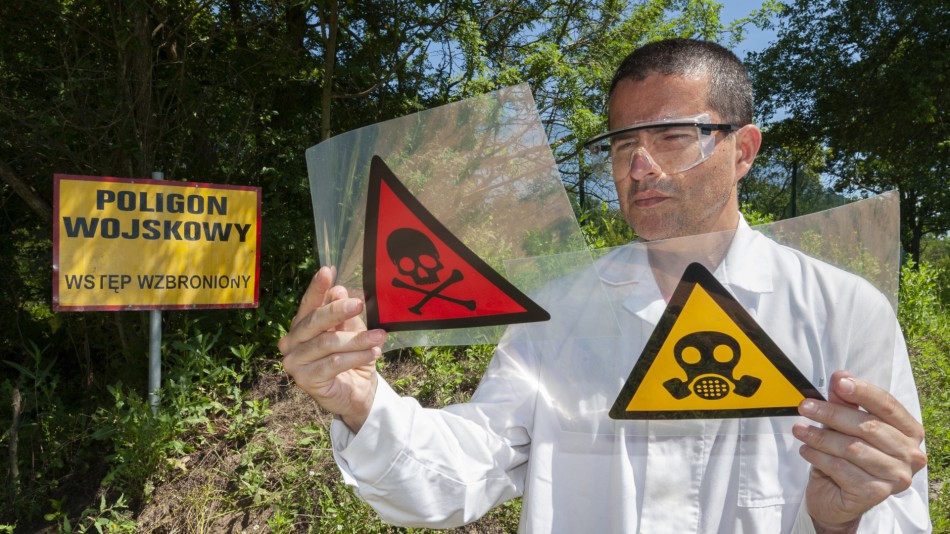 The air around us is still getting more and more polluted. No wonder many scientists strive to find a way to purify it. Thanks to the work of an international team led by prof. Juan Carlos Colmenares from the Institute of Physical Chemistry, Polish Academy of Sciences, we are a big step closer to achieve this goal. They found a way to make an efficient reactive adsorbent able to purify the air from various toxic compounds, cheaply, and effectively.

“Most important is the material we made at the laboratory,” says prof. Colmenares. “It not only adsorbs toxic vapors from the air but also, thanks to its photocatalytic properties, can break them into less toxic elements.” Material made by the team consists of two quite cheap and easy to acquire compounds: titanium dioxide and graphite oxide. “We intended to make it widely available,” explains the professor, and "environmentally friendly.” The innovation here was to use ultrasound to make the two counterparts – one organic and one inorganic – to co-operate. The organic counterpart catches the toxic particles, and the inorganic one destroys them by photocatalysis. Ultrasonic manipulation also significantly widens the active surface and chemical heterogeneity of the new material, allowing for higher detoxification efficiency against the “bad guys” from the air. “Thanks to the ultrasound waves, we get excellent dispersion and the layer of graphite oxide sort of rests on the surface of titanium dioxide,” says prof. Colmenares. Initially, researchers planned to incorporate this material as an additional filter layer for soldiers' gas masks, or into fabrics, making uniforms that would protect a soldier from toxic gaseous chemicals on the combat field. All this, providing the day, was sunny, and garment had additional LED lights activating photocatalysis. However, high absorptance can be achieved even in the dark.

However, although the invention has been tested on warfare agents, its potential applications are much broader and more peaceful.

One could, for example, make industrial suits for workers exposed to toxic vapors daily. “Just milligrams in a suit would be sufficient,” says professor, “if only dispersed properly. The only downside is that potential fabrics should be artificial polymers rather than natural cotton or flax,” he smiles lightly. Scientists would also have to find a way to fasten their nanomaterial to the carrier fabric more securely as clothes get washed. We know that nearly 35% of microplastic found in the environment comes from synthetic clothes and washed linen. "We would not like our nanomaterial to end in rivers and seas,” says the professor. “We aim for being environmentally friendly all the way, not only at the level of destroying air toxins.” Although, as shown earlier by Dimitrios A. Giannakoudakis, the first author of the current work published in the Chemical Engineering Journal and other members of the international team, by ultrasonication, the active phases can be anchored quickly and stably both on cotton and carbon textiles.

If adequately modified, the same technology could help purify not only air but also water and soil. "We have not examined these possibilities yet,” says prof. Colmenares, "but it mainly depends on whether we would safely deposit our nanomaterial on possible future carriers/substrates. While purifying water from toxins, we would not like to pollute it with these oxides; we would not want nanotoxicity, although in theory neither TiO2 nor graphite oxide is toxic to humans," explains the scientist. "After all, who was not chewing on a pencil while at school?”

If we resolved this issue, we could say, "sky is the limit.” New material could detoxify sewage in paper and coke industries or even neutralize highly toxic remnants of World War II, lying deep in the Baltic Sea. “For now, we aim at sewage plants,” says the professor. “

Photocatalysis and nanocomposites can help where microbes cannot because the environment is too toxic for them.” Photocatalysis of the soil is the greatest challenge. However, even this is imaginable with proper mixing, lighting, and a proper photocatalyst, for example, to remove herbicides or pesticides. Cleaner air is within active reach. For cleaner water and soil, we would have to wait a little longer for an optimum solution, but scientists from IPC PAN are just starting their quest for a better, cleaner environment by sustainable approaches for us all.

Mechanochemical boost: a solution without a solution

The Eukaryotic Cell Nucleus Resembles the Layout of a Superstore